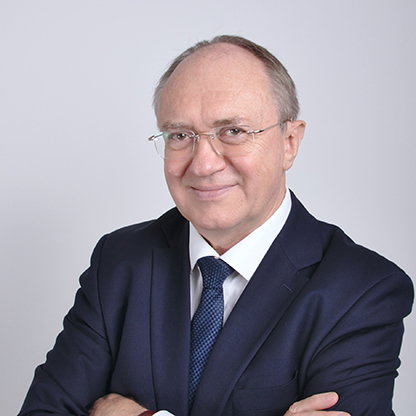 Prof. dr hab. eng. Thomas Skotnicki was working for France Telecom from 1985 till 1999 when he joined STMicroelectronics. He became the first STMicroelectronics Company Fellow and Technical Vice-President. He invented the UTBB FDSOI structure (in production at STMicroelectronics, GF and Samsung). Today he is the Co-Leader of the CENTERA project (International Research Agenda funded by Foundation for Polish Science) and Professor at the Institute of High-Pressure Physics PAS, as well as in Warsaw University of Technology, Poland.
He holds 80 patents and has authored almost 500 scientific papers and several book chapters on CMOS and Energy Harvesting. His models/software MASTAR were used by ITRS for 12 consecutive editions for calculations of CMOS roadmaps. He is an IEEE Fellow, has supervised 34 PhD theses, during 8 years served as Editor for IEEE TED, was on J.J. Ebers and Frederik Philips IEEE Award Committees, and served on the Executive Committees of all big conferences in his field (IEDM, Symposia on VLSI, ESSDERC, ICSICT, ECS, etc).