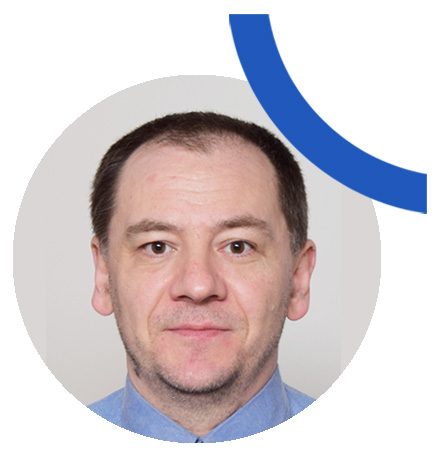 Prof. IHPP PAS Dmitri V. Lioubtchenko was born in 1971 in Russia. He received BSc, MSc and PhD degrees in applied physics and mathematics from the Department of Physical and Quantum Electronics, Moscow Institute of Physics and Technology in 1993, 1994, and 1998, respectively.
From 1994 to 1997, he was a researcher in the Institute of Radioengineering and Electronics, Russian Academy of Sciences in Moscow. From 1997 to 1998 he was a visiting researcher at The University of Liverpool in U.K. In 1998, he joined the Radio Laboratory of Helsinki University of Technology, now Aalto University, Finland, where he was a Docent from 2005 and from 2008 till 2013 he was Finnish Academy Research Fellow. In 2017 received a Docentship at the Department of Micro and Nano Science, KTH, Sweden. From 2019 he is Full Professor in the Institute of High Pressure  Physics, Polish Academy of Science. He was a visiting researcher at The University of Liverpool, U.K. (1997-1998, 2003), Trinity College, University of Dublin, Ireland (2001), Chalmers University of Technology, Sweden (MC2 access program for use of clean room, supported by EU, 2008), Universidad Carlos III de Madrid (COST VISTA program, 2014). He was a member of the EuMA General Assembly (GA) January 2016 – December 2018.
He has more than 20-year experience in electrical engineering, especially in the development of new materials for millimeter, microwave, and optoelectronic applications particularly, on the development of active and passive dielectric waveguides and components for the frequency range above 100 GHz. He has published more than 100 papers in refereed books, journals and in the conference proceedings. He is also an author of two monographs on millimetre wave components and on dielectric rod waveguides and resonators.